The 10 best CS fragmovies of all time

All the movies we can’t stop watching. Plus, a quick trip down memory lane.

Despite Counter-Strike turning 21 last month it’s more alive than ever before. Over the years, CS has become more than just a game. For many of us it has turned into a tight-knit community.

Every single day, there’s something wonderful happening or being created to talk and laugh about.

But why the hell do we love this game so much and for so long? At some point, well, it really just comes down to the frags. Who doesn’t love a few USP headshots in the pistol round? Plonk, plonk, plonk. You can literally SEE that sound.

Part of the reason we feel so strongly about those frags, is that Counter-Strike makes it so hard to kill someone, having to account for multiple factors in-game. So it’s just incredibly satisfying to hit that highlight reel headshot or to pull off a nail-biting clutch.

So much so, that people started recording their heroics in the form of fragmovies, a showcase of skill and domination which is now a much loved part of the CS community. But fragmovies are more than just a compilation of kills: Editors spend hundreds of hours perfecting each timing, each sound, and each graphic to match their vision.

Fragmovies have evolved into a form of art - they give us goosebumps, make us think “that’s stupid!” but compel us to try those weird things out ourselves, and most importantly, make us feel emotions in a way that is unmatched in gaming. That’s what this list is about: The 10 best fragmovies of all time.

Why can I be that judge? Well it turns out, my mom watched phoon play when I was in her womb, and the doctors said I bunnyhopped out of the hospital when I was born. I play B-site on Mirage every round in hopes that one day I hit a coldzera. And for my money, save rounds are the same as deagle rounds. Suffice to say, I’ve watched an unhealthy amount of frag montages.

Without further ado, here’s my personal (and all time) Top 10.

‘If it’s broke, abuse it’ is the mantra CS:S players had with the Deagle and AWP, and that’s exactly what INCORPORATED 3 is out to show us. rechyyy throws clip after clip of stupendous multi-kills and collaterals, seamless transitions, and an absolute banger of a soundtrack.

It’s the true LE TANK experience, with players getting frag after frag after frag and making it look easy. Oh, and did I mention rechyyy’s love for dramatic ‘nade kills? INCORPORATED 3 squeezes as much hype as it can from a game that, frankly, offered as much entertainment as the first map in a BO5 final.

Black Hole Sun goes for perfection. A polar opposite to the previous entry on this list, Suky cherishes each frag, each moment of their movie. Every second of the 1:36 minute video bleeds color, music, and emotion. There’s not as much to say about Black Hole Sun as there is to experience. It’s mesmerizingly good, just a bit too short for our liking. Kinda like BO1s.

Sometimes we want to stop giving a damn and just do goofy stuff with friends - that’s exactly what Lollipops 2 is about. Oui and co. hit some absolutely ridiculous wallbangs and collaterals, snuck behind enemy lines, and slammed leap-of-faith-juan deags.

Like ENCE, they’re having fun, but unlike the Finns, they actually look good doing so. Oui adds a sprinkle of great South Park art and animations with a touch of fresh music, cooking a highly entertaining fragmovie.

Every time I get 16-0’d in solo Q, get jumping one-deaged, or go 007 on Dust 2, I wonder if I will ever get out of silver hell; I wonder if the grind is really worth it. But Counter Strike: Passion inspires me to go at it again.

AngryNerd incorporates Steve Jobs’ fantastic talk on passion with great frags by pro players, who themselves have been passionate enough to spend their entire lives on this game. The pacing is slow and the soundtrack is calm, which really lets you soak in the essence of the movie. Definitely worth the watch, and one that I find myself coming back to frequently.

Long before the age of CS:GO’s popular ‘edshot machine, ScreaM, the original headshot machine was Jordan “n0thing” Gilbert. And Evil Geniuses aren’t messing around with the title, the man really was seemingly incapable of hitting any other part of the body.

As I watch this movie for the fourth time in a row, I realize that few things are better in life than watching JGilbert lighting up the killfeed with headshots as heavy metal jams in the background. “n0thing but headshots” is an absolutely unmissable classic where the frags and action are second to none.

“Pubmasters - The Movie'' is deceptively named: it may make you believe that the ‘Pubmasters’ are the ones doing the fragging. Not really, since much of the movie sees the squad get hilariously destroyed by their opponents.

It’s totally worth it though, to see three-man boosts sprint around the map, a wall of riot shields jamming B entrance, or to have a 5-man stack inside pit naded and deleted in seconds. Still, Pubmasters - The Movie remains as one of the few exploit movies the fnatic manager couldn’t delete and a memento of the insane things that happened on 1.6 servers.

ANNIHILATION 2 is INCORPORATED 3 on steroids, and it blows the latter out of the water. Dager takes CS 1.6’s elite names and puts their best frags on show, with veterans like GeT RiGhT, SpawN, and TaZ dominating the server - heck, he even makes us remember how good gob b was back in the day.

Clutch editing and a fast pace, combined with a soundtrack I can’t get out of my head, makes ANNIHILATION 2 the perfect movie to get hyped with before a matchmaking game - which you then bottom frag and inevitably lose 2-16.

s1mple is a man who needs little introduction. A phenom who exploded onto the scene in 2016, he has since been known for his ability to consistently carry past-their-peak pros, a crown that has been recently handed to Vitality’s ZywOo.

However, s1mple - Unchained is a tribute to his early days: An experience of pure, unfiltered greatness. I just can’t get enough of s1mple hitting insane shots, winning rounds from impossible situations, and of course, the abundant knife kills. PHINX FX’s choice of music and editing is solid, but he really just lets s1mple’s fragging do the talking, which is absolutely perfect for me.

You may not know when phoon’s gonna bunnyhop behind you, but you know for sure that ‘phoon too much for zblock’ is a staple for any fragmovie list. Easily CSS’s best production, it proves yet again that nothing, not even ESEA’s fancy new zBlock, could stop that kid from bunnyhopping.

It is an absolute pleasure to watch phoon speed his way through ivy, through connector, out middle, while the rage and disbelief from his opponents and teammates alike only add to the charm. phoon’s incredible skill at bunnyhopping is matched only by his nutty aim, as he flicks and pops heads with ease. His crazy heroics on CSS servers are remembered fondly to this day by Twitch chat, who promptly spam “phoon” when a rare instance of bunnyhopping is seen in matches.

Clockwork 4 is a true masterpiece, let’s just get that out of the way to begin with. NikkyyHD takes the ‘movie’ in fragmovie almost too seriously, and conjures near photorealistic Counter-Strike scenes, which is basically how reddit thinks of Source 2. To say that the movie is heavily edited would be an understatement, and the fact that Clockwork 4 has Michael Bay-esque visuals and a Katy Perry song while still looking like a CS:GO fragmovie blows my mind.

Look, Clockwork 4 may have its quirks, but you can’t really argue with how accurately Nikkyy depicts B site Inferno: With a storm of FaZe Clan’s tears. She single handedly does so much right in Clockwork 4 that it makes it the most awe-inspiring and memorable fragmovie I have seen.

There are only so many things you can put in a top 10 list, and just like MIBR, these fragmovies didn’t make it. Don’t discount them though, each of them have interesting touches that you’d love to dig into.

Those were all my favorites. If you enjoyed them, or thought that SuperstituM should have been on the list, let me know on Twitter, or give TL;DR’s a shouting at on their Twitter or Instagram.

Get one short email, twice a week with a tl;dr of the biggest stories and matches in Counter-Strike.

We've sent a confirmation link to your email.
Oops! Something went wrong while submitting the form.
Read the latest edition

Have you recently looked at your FPS in Counter-Strike and thought to yourself: "Why isn't it higher?". Yeah, we thought so. 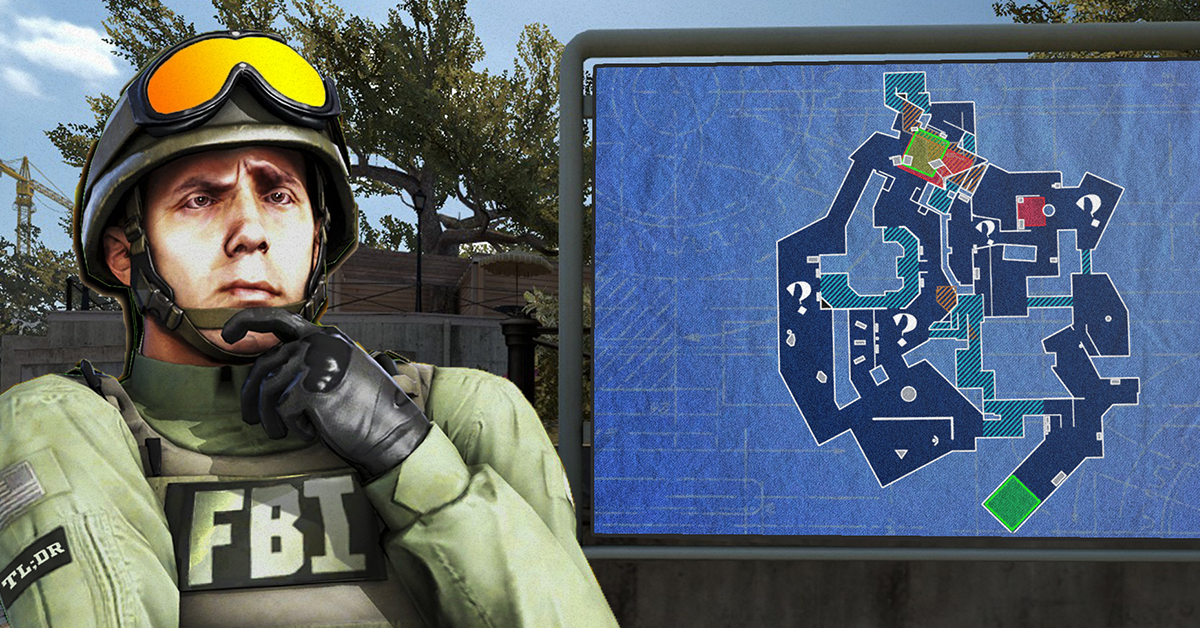 The most accurate CSGO callouts including Ancient! Get to know all the spots in Counter-Strike - from firebox on Mirage to cubby on Inferno.