Movistar Riders are continuing their reign of terror, BIG are terminally online and EG are mulligan-ing their hand. 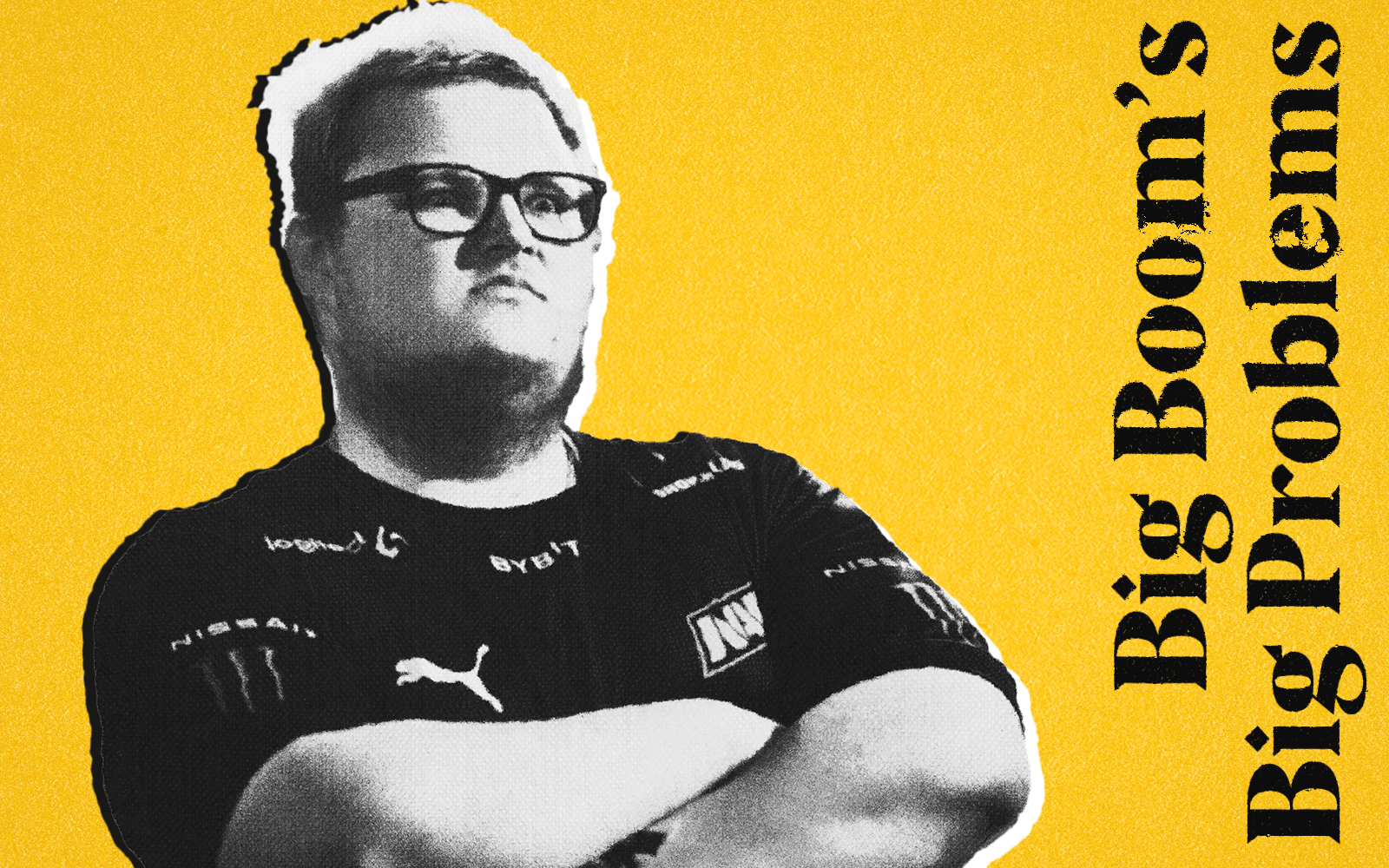 It’s a good thing s1mple isn’t toxic any more, otherwise Boombl4 might have tried to date him.

And that can’t be a good idea.

Boombl4 came out and gave a very revealing interview with Russian YouTuber (?) РАЙЗ where he went through the trials and tribulations of his relationship.

With his wife, not s1mple.

This included how much he spent on her - somewhere around half a million euros - that he’s ‘against drugs’ after trying it once in Mexico (weird how everyone gets caught on their first try…) and that he indeed was cut due to his ex-wife’s Instagram posts.

The internet is fucking insane.

Apparently he wasn’t even dating her at the time he proposed. We’ve… all been there?

There were some jokes in there, but it seemed Boombl4 was totally earnest when he said he was thinking with his heart and not his head. Your heart, eh?

It’s a confusing hurricane of information, and quite how Boombl4 ever thought this marriage would work is beyond us. But then, we can’t exactly judge a young bloke for his relationship choices.

We’ve all dated an insane person here or there, but we didn’t have the details of it plastered all over the internet.

So fair enough, Boombl4. Seems he has a good sense of humour about the whole thing, at least.

The first group stage for IEM Cologne is over and, to be honest, the striptease wasn’t really worth it — if ESL had invited the highest eight ranked teams on HLTV we’d have nearly got the same result.

With one BIG (heh) exception.

Fielding k1to yet again, Die Mannschaft spitted and spluttered their way to an early exit in Cologne. Which shouldn’t really be a surprise — we warned you their Pinnacle Cup win mattered about as much as a promise from Boris Johnson.

On one hand, losses to Astralis, who had k0nfig back in full spearman mode, and Outsiders shouldn’t be unforgivable offences given the stand-in situation.

On the other, this is the event tiziaN called “more important than a Major”. There’s no brushing this particular disappointment off.

Taking BIG’s place in Cologne’s real group stage are 00NATION and Movistar Riders, with the Spaniards carrying their Valencia form into Cologne with a statement 2:0 win over Vitality. More on them later.

As for 00NATION, a 16:6 win over Astralis was followed by a respectable 2:1 loss to Spirit, leading to a decider match dubbed ‘The Last Classico’ by ESL: TACO and coldzera’s 00NATION vs fer and falleN’s Imperial.

It’s a shit name (SKlassico is way better). But it’s an even shitter narrative: this isn’t TACO and coldzera’s 00NATION, this is dumau, latto, and try’s. coldzera is finally the support player TACO always said he was, and TACO has taken his 10-15 frags a game to the IGL role rather than entrying.

But, it did validate coldzera’s decision to not join The Last Dance. dumau is Brazil’s hottest prospect, who can put up huge numbers while coldzera is waiting for him to die.

Meanwhile, Argentine AWPer try — who we pencilled in for a breakout year in January — has done what Messi did in 2011: cut his hair, and levelled the fuck up. He’s had some huge maps in Cologne: 1.89 against Astralis, and a server-topping 1.30 against Imperial in the decider.

South America needs some good news: FURIA are mid, Imperial’s tiny-ass pan fire has burnt out, and MIBR are so easy to beat the org cashed out on their BLAST spot.

00NATION, by combining two even more mediocre teams than those three, might have cracked the code.

Forget a new mouse or a fancy headset. Forget skins, and forget trying to get diamond hands hodling your GME or BTC.

The thing you can invest in is… lumbar support.

Yes we know that sounds awfully weird, but hear us out guys. As gamers we sit down a lot, and despite our the best intentions, here at TLDR we’re definitely slouching.

So good lumbar support, is probably one of the best investments to make in your long-term health.

Luckily Secret Lab’s Titan Evo 2022 has the best lumbar support we’ve seen in a gaming chair, ever. Adjustable while sitting in it, and not needing to deal with a wonky pillow, the Titan Evo 2022 will help you settle in just right for those long gaming sessions.

The chair comes in three sizes and a 5-year extended warranty.

The TLDR verdict? The best investment you could make right now. And PC Gamer agrees.

More surprising is the changes they’re actually making. Stewie2k is out, which, duh, but RUSH is also apparently out. Stewie would be replaced by HooXi or nealaN, with valde supposedly being the one to replace RUSH.

That’s all good. Just one question.

Brehze and CeRq’s contracts supposedly end soon, and RUSH is something of a reliable consistent player. So… we’ll just cut him and keep the guys who are leaving soon.

Who have been crap for a few years now.

Maybe the plan is that a new (real) IGL would fix Brehze and CeRq’s form. Maybe it’s that the whole team is going to be changed and it’s just a waiting game for those two to leave. Maybe it’s just that valde is a good anchor in similar positions to RUSH.

valde seemingly has the worst taste in teams you can imagine. North, OG and EG in the space of about four years. That’s like if Boombl4 decided to date Amber Heard and then Cruella Deville, or something.

Still, he’d be making a metric ton of cash, which would probably help the situation.

Every time, you disappoint. We weren’t even expecting much.

Look, Movistar have been on a tear and haven’t really looked like losing. But we thought you’d at least get a map.

Just like OG in the past, G2 just comically fail at every tournament, in new and exciting ways. Wonder what the common denominator is..?

Movistar Riders, on the other hand, are finding new and exciting ways to cut through teams. They just refuse to lose - winning close games, winning dominant games, smashing through teams with rifle power, cutting attacks down with the AWP.

They - and keep it quiet - look like a top 5 team in the world at this moment in time. Shhh!

Another impressive team is NIP - who we’ve loved to hate in recent months, but we can’t any more. This team is legitimately very good. hampus, through multiple roster moves, illness and uncertainty has consistently guided NIP to top performances.

They 2-0’d Heroic in a very impressive first game.

Heroic will face off with MOUZ, who were surprisingly decent in their loss to NaVi. They took a map. At this point, we’ll take it.

G2, on the other hand, face off with ENCE in a spicy lower bracket game. Every game at Cologne is a banger. ENCE were toppled by Vitality, who recovered from a shaky performance against Sprout to glide past ENCE.

There was always something in the back of your mind telling you ENCE weren’t that good, and it was right. Well done you.

The final two games of the day were Cloud9 vs Outsiders - which we’re sure you can guess the result of - and Team Liquid vs Spirit, which was a BANGER.

YEKINDAR nailed four on the Scout in his second round, we got Patsi on peak form, it was a lovely one to watch. We don’t even care who won, as long as everyone had a good time.

As ever, all games are here if you want to take a closer look.

CS10 is right around the corner

🤡 Don’t take yourself too seriously