Get ready for 1024 games of Rio’s Road to Major qualifiers and read an explanation for why you shouldn’t invest in esports stock.

O say can you see

It would be easy to think that he arrived several weeks ago, but that would be a lie. Clearly, looking at his statistics for this tournament, he only just showed up for the semifinals.

In both their quarterfinal versus MOUZ and their semifinal versus Cloud 9, oSee was the kind of player that every NA fan has been begging him to be.

He topped the scoreboard versus C9 with a 1.18 rating and a fantastic performance on the deciding Dust2, to help Liquid sneak into the Grand Finals. He even got an AWP Ace.

On the other side of the bracket, Vitality had quite the weekend so far. ZywOo, who had a couple of fantastic games of his own, shot a 1.37 rating en route to their 2-0 victory against Outsiders.

The French prodigy was even more impactful against G2. Despite a strong performance from m0NSEY, the mixed European squad generally fell flat.

Three members of Vitality, Spinx, Magisk, and ZywOo, ended the series with over a 1.3 rating in their dismantling of G2, more than making up for the other dupreeh and apEX’s struggles.

It’s been a great tournament for Vitality; Spinx, their newest addition, has been in the positives rating-wise throughout the tournament while ZywOo currently tops the event’s individual leaderboards.

That is a huge improvement over what we saw from them in the first half of the year and hopefully, they’ll keep this form up for the Major.

Cloud9’s performance, on the other hand, is one they’d probably like to improve on. They did manage to beat FaZe, the number one team in the world, thanks to what might be the best series of Ax1Le’s career.

He ended the series with a 106 ADR and over a 1.5 rating in that series, a performance that sadly he didn’t replicate against Liquid.

After over a month, there is just one series left in ESL Pro League (though of course, it is a best of five)… 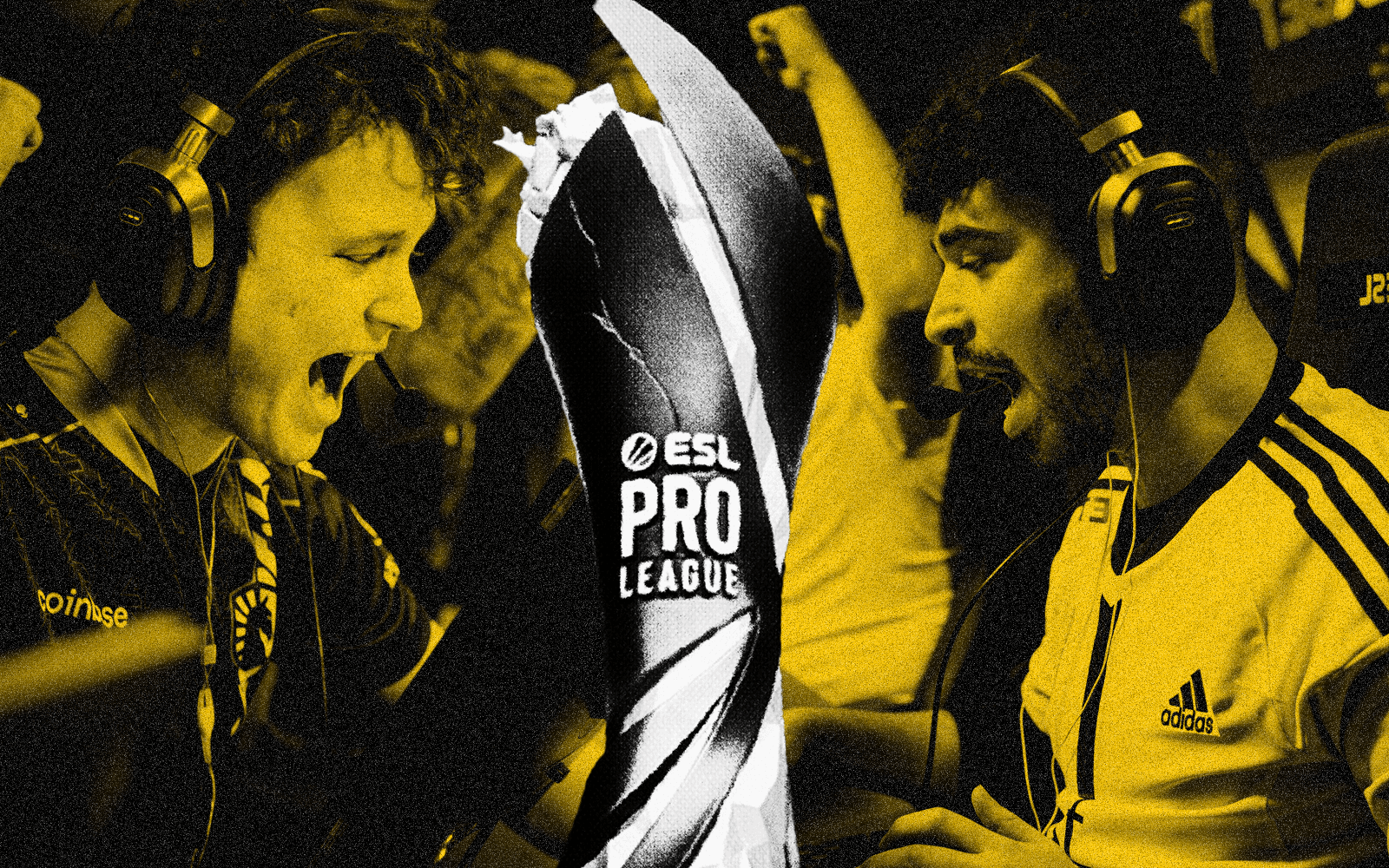 We’re very sorry that the intro to this story about the Grand Final at ESL Pro League is going to be a rant, but we have to get this off of our collective chests:

Really. The first two maps of the Grand Final between Vitality and Liquid were largely forgettable. The teams traded 16-7 wins on Inferno (Liquid) and Dust 2 (Vitality), before we came to Mirage.

And then we got the show we had hoped for. Triple overtime; 51 frags from ZywOo; insane clutches and in the end a victory for Liquid that, by all rights, should have concluded the Grand Final.

But it didn’t. After more than 4 hours of action, and an epic map, we were cursed with the potential of two additional maps. And not the favourites for either side.

Map 4 was Overpass, which none of the teams had more than 60% winrate on, and the decider was left to be Vertigo, which should be a punishable offense in itself. Who in their right minds want to see a Grand Final be decided on Vertigo?!

From Mirage and on, the game was great, almost as if the first two maps didn’t really matter… Overpass became the tit-for-tat that we have so often seen; Vitality got a great start on the T side, getting 5 in a row, after which the Americans hit back with a streak of 6.

The rounds were chaotic, messy and well… random. Just the sort of gameplay you expect when you’re playing map 5 and 6 in your rotation.

And just the sort of gameplay that suits NA teams. Puggy back and forth skirmishes, late pushes, and lots of duels left Liquid in the driver’s seat for most of the map. But then there’s ZywOo. The phenomenon.

When it’s all on the line at 13-14 and you’re a man down, there aren’t many others you’d rather want holding that angle. So he of course got a double on A, a third with a molly and all but secured 15 rounds for Vitality.

He was also key to winning the overtime that Overpass got to, and then we’re back at it. Vertigo as the decider in a Grand Final.

It really isn’t fair to the 9 other players on the server, because NAF played a blinder, oSee continued his form from the semifinal and even Magisk and dupreeh showed sign of life. But let’s be honest, it was all ZywOo on Vertigo.

And so Vitality won with the MVP dragging the rest of the team over the finish line, in what probably redeems Vitality’s decision to go for an international lineup.

But Pro League is just the starter, Rio is the real test for this Vitality lineup.

This is not investment advice

If there was any doubt that investing is esport is a dubious venture, look no further than to FaZe and their new publicly listed company.

In their latest S1-filing, the company announced that $71.4M of it’s $100M guaranteed investment, defaulted on their obligation, prompting their financial backer B. Riley to invest an additional $53.4M to honour the guarantee.

The markets subsequently reacted to this news by dropping the share price from $14,75 a week ago to $9.68 today, shaving a hefty 30% of the company’s value.

Now if we are to unpack what has happened, the investors in the SPAC that merged with FaZe to form the public company, were not in on the FaZe-hype at all.

Instead of exchanging their investment for FaZe stock, 92% of the investors chose to pull out and get their money back, with the average for the same period being 24%. In non-investor words: this is not good.

It’s still early days for the stock however and so far FaZe have kept the floor during the first 6 months, while the broader economy and indexes have tumbled down.

For Astralis, another of the publicly listed esports companies, things aren’t so rosy as we near the 3 year anniversary for them going public.

Since launch the stock has lost almost 80% of their value, although they still do have their LEC spot which is rumoured to be worth in the vicinity of €30M (more than the company is valued at altogther at the moment).

So, if you’re thinking about investing at the moment, you’re probably better off buying skins than esports stock, as insane as that might sound.

Who qualifies for the Major?

After five weeks of Pro League, you’d be forgiven for wanting a break from CS for a bit.

That is, if you’re a normal fan. Here at TL;DR we’re immune to ‘over-saturation’. Just shut your eyes, for god’s sake.

This week we’re treated to FOUR RMRs: two European events in Malta, the APAC tournament in Australia, and American one in Sweden. Wait, Sweden? Don’t ask.

Most of the games will be self-explanatory — the FaZes, NAVIs, and Liquids of the world should progress pretty easily out of their Swiss stages.

The interesting part of these events will be who scrapes through the event, the small teams you’ve not seen before and the big teams who struggle.

Take the Europe RMR B, where teams like Bad News Eagles, deko’s 1WIN, and jerry and forZe could easily upset a k0nfig-less Astralis or fnatic to make it through.

Teams like B8 and Aurora have little-to-no hope, but we get former MOUZ NXT siuhy’s LAN debut as GamerLegion’s new IGL, potential of another Imperial-00NATION grudge match, and Grayhound’s inevitable bottlejob against one of IHC, Rare Atom, or JiJieHao International.

All in all, it should be a fun week. When you play 15 best of threes in one day, at least one or two are gonna be good games, right?

So, let’s strap in for a week of new names rising, old ones falling, and most importantly: people moaning about Buccholz.

Find all the streams here, and get the full tournament overview from Liquipedia:

“You should see the other guy”