Zero roster-moves this weekend - for a change! Instead we take a look at all the Dreamhack action, BLAST Premier and CS:GO... ping-pong? 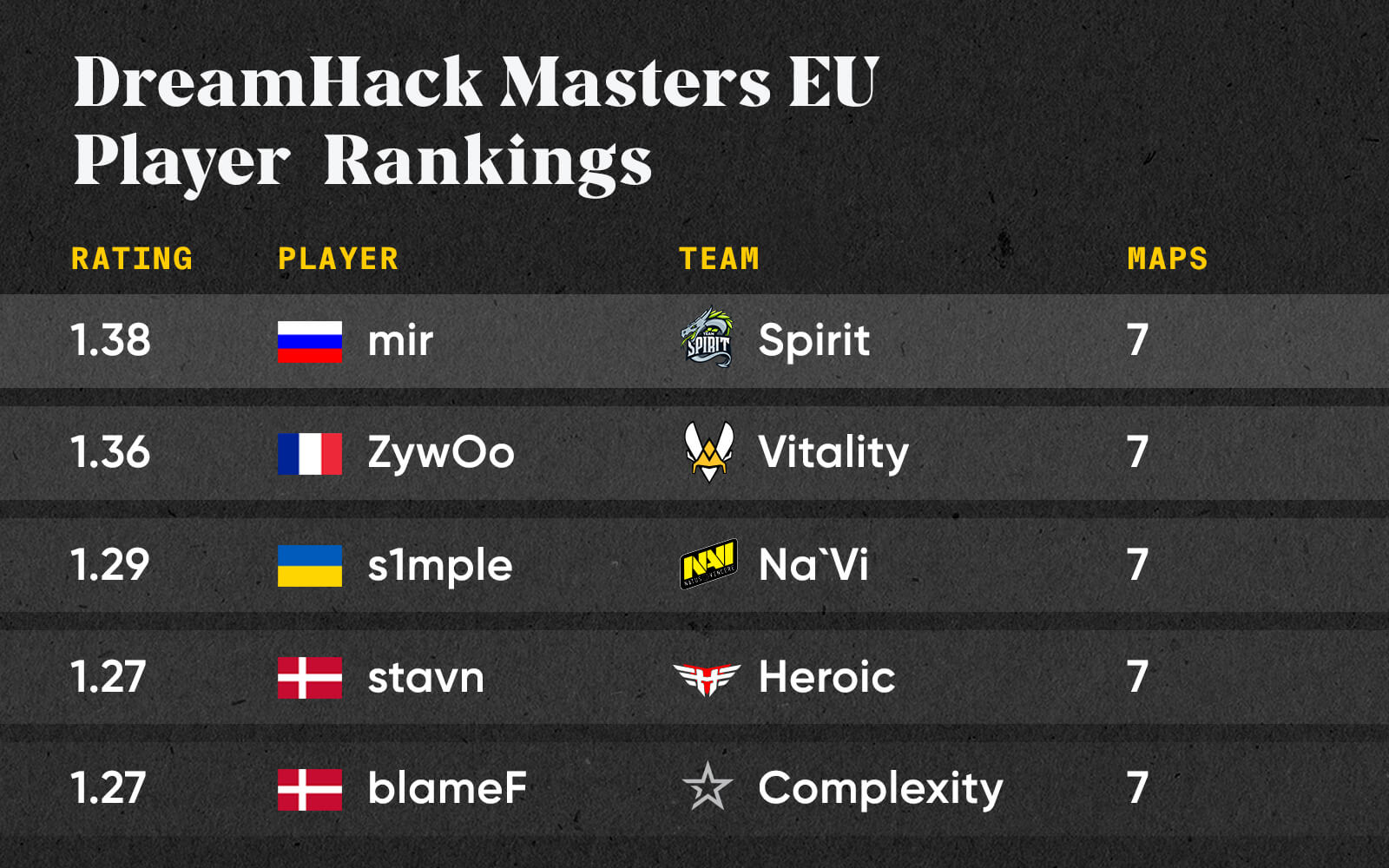 With the last matches played yesterday, the inaugural group-stage at DH Masters EU is now concluded, and we can list the winners and losers. The two biggest winners are BIG and Mir. BIG because they went 3-0 in a group with MAD Lions, Complexity and Mousesports, and Mir because other than just being awesome, he's sitting on top of the stats leaderboard with an insane 1.38 rating for 7 maps. Next man up on Na`Vi?

The biggest losers are just as easy to identify: Mousesports and ENCE both went belly up in the groupstage, the former even managing to go 0-3, in what can only be described as a catastrophic fall from grace. Less of a loser is North and GODSENT that had high hopes, but tough groups, and had to bow out somewhat expectedly.

Fnatic managed to avoid ENCE and Mousesports' fate on the last day of play, but through no performance of their own. They were wholly dependent on Spirit beating GODSENT, something Mir almost singled handedly made sure of.

FaZe on the other hand, continues to impress, and even with bymas taking olofmeister's place and having little practice time, they managed to go 3-0.

DreamHack Masters EU resumes on June 8th, where the first portion of the lowerbracket will be played, while the two upperbracket semifinals will kick off on June 9th.

If for some weird reason you were still not sure who the best team in Brazil is, your answer should be getting clearer by the minute. FURIA placed themselves in the Upper Bracket Final in DreamHack Masters Spring straight out of groups. They're set to face 100T, who placed themselves there in equally impressive fashion - emphasis on impressive.

In what we thought must've been a typo at first, 100T managed to win swift 2-0's against both Cloud9 and Gen.G but lost 1-2 to EG - we don't know what should surprise us more; EG winning or 100T losing to EG.

Cloud9 and Gen.G are joined by MIBR and Liquid respectively in the Lower Bracket Semi Finals, as Cloud9 racked up wins against EG and Gen.G and Gen.G just didn't lose to EG. Congrats Gen.G, you're the worst of the best. If you want to see the full picture, you can of course check out the bracket on Liquipedia as well.

How good is your ping pong?

Jumpshots get redefined with this new workshop map

It's not even the final form

We hope you're sitting down, because we are about to take you on a journey. Blast Premier was supposed to consist of three parts: A group-stage, a showdown and a Global Final. Due to Covid-19, only the group-stage was played before all hell broke loose and everything transitioned to online play.

That means we currently have 6 teams qualified for the Blast Premier Global Finals, 5 from Europe and 1 from NA. To accomodate that, and internet play, Blast then decided to host the last two parts of the tournament in individual EU and NA competitions.

And lucky for us, there were some pretty big names that missed the Global Final qualification in the inaugural groupstage. In EU the Blast Premier Spring Showdown includes three of the top 5 teams in the world: Astralis, Fnatic and Mousesports. Add in Vitality, ENCE and MAD Lions, and you have what's supposedly a banger tournament.

Across the pond only Team Liquid qualified for the Global Finals, which means we get a who's who of NA teams, and even MIBR have made their way in there.

Banger Inc: What Liqud vs Astralis rivalry looks like