We're getting a burn-out of writing about burn-outs. Can we get a doctor's notice, boss? Oh and Complexity won against Na`Vi. What?! 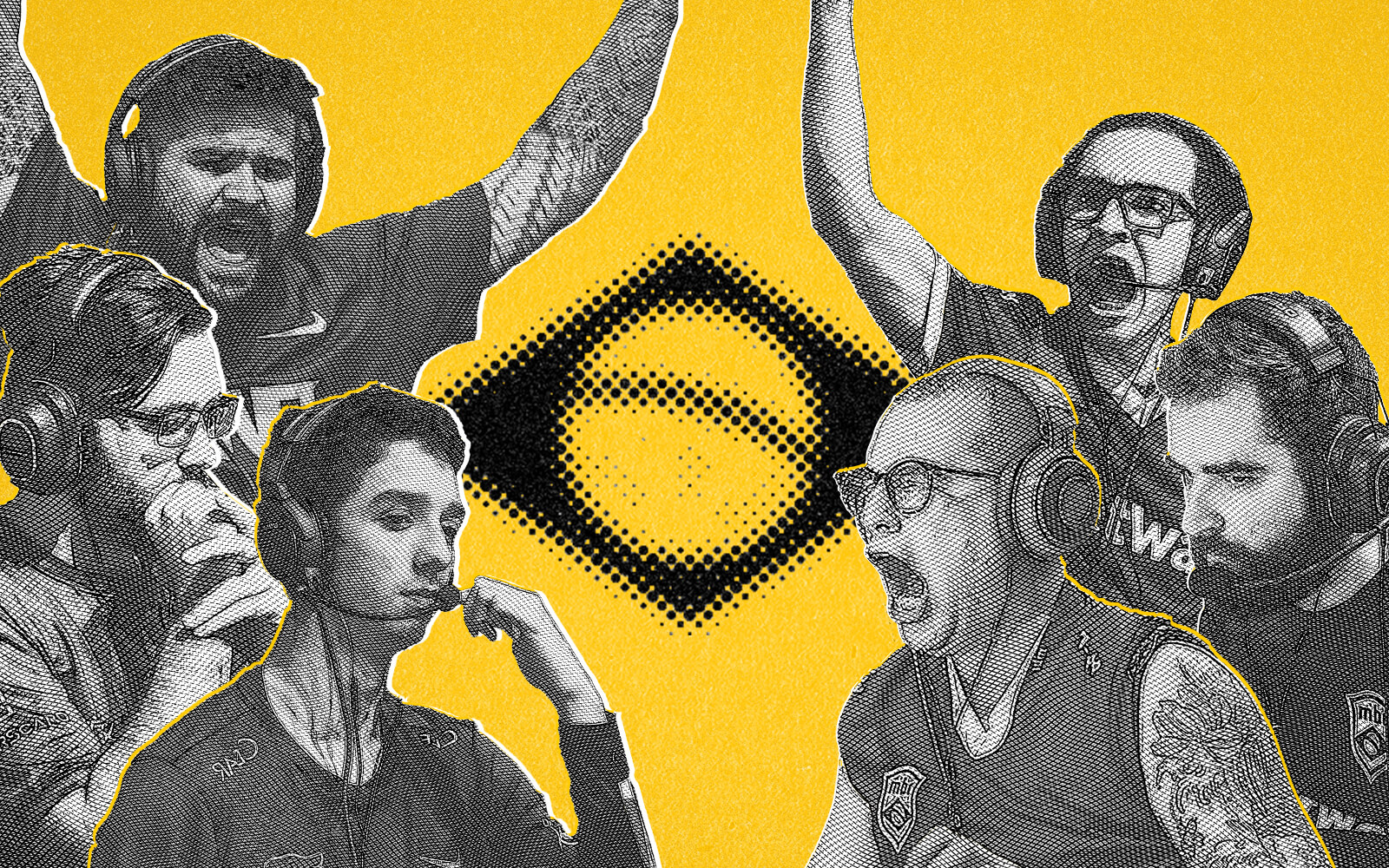 What's Portuguese for 'respect your elders'?

We thought it might be "vocês são uns merdas", which is what fer told FURIA. Twitter Translate says that's something that might not pass the new CSGO chat filter, though.

Why, exactly, are MIBR so angry? We... we're not entirely sure. It seems to be because FURIA followed the rules regarding round restarts. The rule states that regardless of crashes, if damage is done, the round isn't restarted.

fer died due to this crash in a pretty important round, and it seems FURIA didn't restart the round due to some grenade damage. Once FURIA had proof, it seemed they rolled it back. So like, it all seems okay. MIBR even won. CHILL OUT.

As michau outlines, the rule is a bit outdated and broken. But MIBR are no stranger to breaking rules in important games... Come to Brazil, Professeur. How dare you post incriminating but real evidence.

MIBR face EG next, after the Geniuses masterminded their way past Liquid. Seems they've awoken from their recent slumber - even tarik only went -3.

Gyms are open, blameF's back to lifting

Looks like Team KennyS is BLASTing off again... ZywOo managed to shut down his fellow countrymen with a monster performance in Vitality's opening round match at the BLAST Premier Spring Finals. With a 1.70 rating over the two maps, there's no question as to Zywho might be the best French player. The only other players managing a 1.0+ rating were KennyS and RpK, of all people.

This result pitted Vitality against FaZe in the upper bracket semifinal as the latter took out ENCE. Sadly for them, ZywOo didn't manage to make up for the rest of the team as usual, and the Frenchmen fell 16-11, 16-9 on Nuke and Dust2.

electronic, on the other hand, managed to get out of s1mple's shadow once again, as he got an even higher rating in Na`Vi's win against NiP. Complexity didn't have quite as easy a time in their match against OG, playing the full three maps but still continuing to the next stage, setting up a Complexity vs s1mple matchup - ironic.

It turned out to be a really s1mple showing, not because Oleksandr the Great was on his usual bullshit, but because k0nfig showed semblance of his 2017-self. His 27-4 on Mirage didn't make everyone happy though. How much? Meanwhile blameF currently looks like the best Danish IGL, even if gla1ve came back this moment.

Down in the lower bracket, G2 took care of a lackluster ENCE, and worse, a lackluster Jamppi. The only thing that's worse than Jamppi's performance? His lawyer's mucking around in his suit against Valve. Meanwhile NiP shut down OG, meaning Aleksib joins his fellow Finns on the loser's bus ride home.

Who better to beat MIBR than the man who helped beat them?

zews found the gaps in the MIBR playbook - well, eventually - as EG 2-0'd MIBR. It wasn't entirely simple, though - it took over 60 rounds for the Americans to beat the South Americans, but they got it done eventually.

Some credit should go to tarik, though. If anyone knows how to make MIBR lose, it's him.

Interestingly it was these two in the final beating out FURIA and Liquid, who had just been to the final at DreamHack Masters. Turns out online play is inconsistent. Who knew?

That was despite HEN1 putting up another stupendous performance throughout the tournament, with fer and yuurih as 2nd and 3rd. fer didn't show up at all in the final, which is a large reason why MIBR fell at the final hurdle - but Brazilians can take heart from the fact they had the top three. Vamos!

Man, and we really thought JUGi was being signed for Astralis because everything was hunky-dory over there.

It turns out behind the smiling mask of being the best team in the world, was the crying face of an overworked and underpaid group of human beings. It's easy to forget that behind the identikit 'beings' that populate our wonderful servers, there are people, and those people are just like us.

Richard Lewis outlined everything you need to know about Astralis' burnout story - and it's fair to say you'll come out from it having much less respect for the business behind the impressive quintet who won everything. It's a long, but superb, read - but remember that we only get one side of the true story.

He essentially suggests that the Astralis players have been burnt out since the end of last year and the Astralis management told them sweet nothings about their vague 'plans' to help ease burnout, only to bring them back too early after the player break.

The team were already reportedly unhappy at being forced to play BLAST Pro Series' (almost as unhappy as aizyesque was to have watched them) and felt they were being disregarded. With help of controversial Danish unionist Mads Øland, they forced the team to give them a break.

Of course, Astralis tried to pass this off as a positive, that they were doing everything they could to help their team by testing a 6/10/400 man roster, and that es3tag, JUGi and Snappi weren't just cheap and inferior options. Some people - the average Astralis fan - bought it, but most of us were wise.

Oh, and while they were burnt out and unhappy at having to play crap tournaments, they were asked to take a pay cut, which the players in the organisation thought wasn't even necessary.

It's like if you're topfragging, but one of your teammates baits you then demands you drop him an AWP in the next round. All while making sure you gain less ELO for the win. 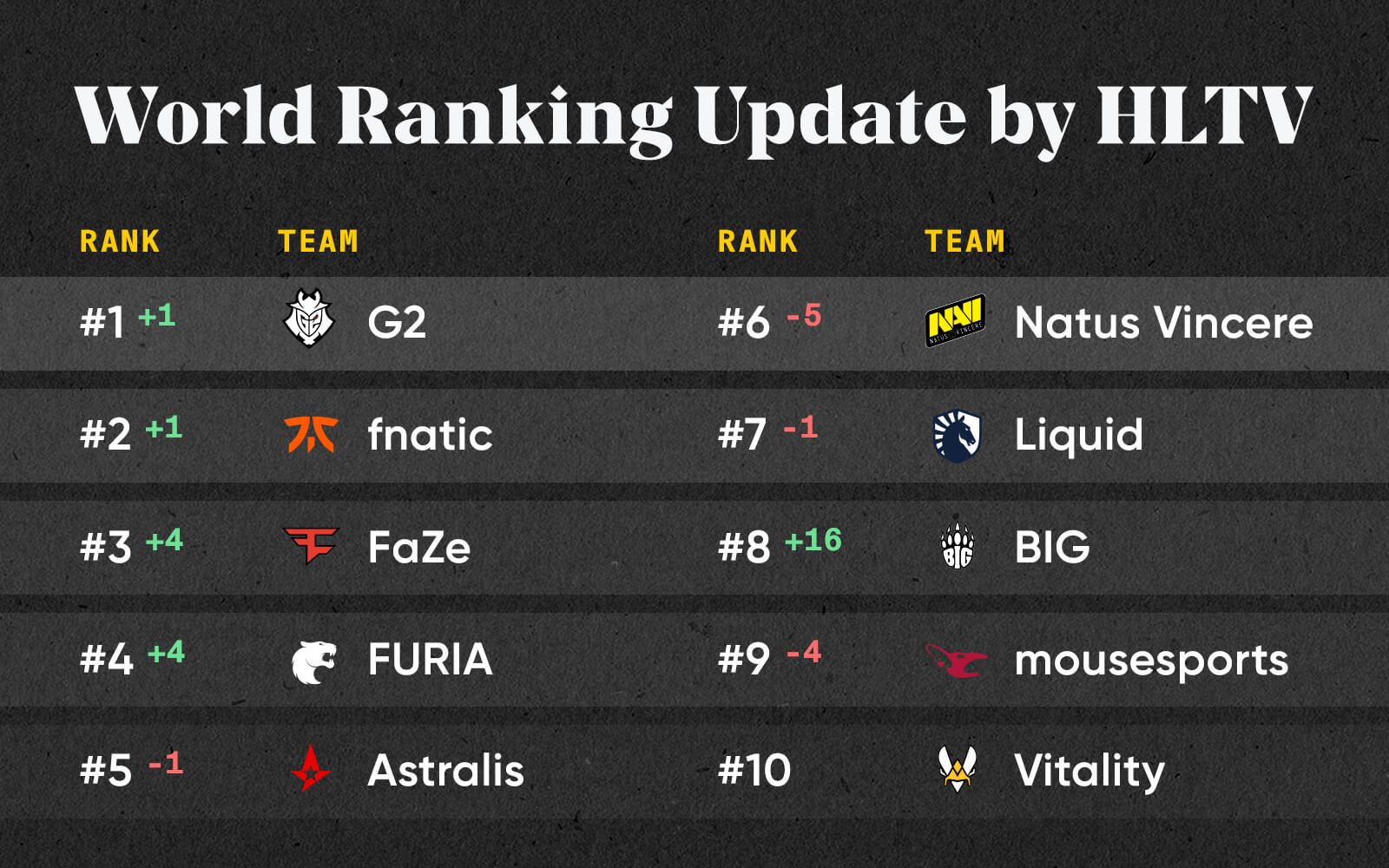 And the best team of the world is... G2? HLTV has come out with their latest ranking, in which G2 Esports have found their place at the top. We must admit it's not the most solid number one in the world, but hey, maths never was our best subject anyways.

Along with G2's rise come FaZe and FURIA, who have jumped to spot number three and four respectively. All this movement is at the expense of Astralis, who are now dangerously close to burning out of the top five.

In the online-only environment another notable change has happened, this time in the top ten. With their recent win over G2 at the DreamHack Masters Spring EU, BIG have jumped sixteen spots, coming in at eight place. All we can say is, don't pull a 2018 Cloud9 and fail to follow up on your achievements, BIG.

BIG's BIG jump - we're sorry, we just had to - starts to make a little more sense when you start looking at some interesting statistics Lukas from RushB Media brought up on Twitter. BIG have a 69.5% winning record in 2020, with 91 matches won and 40 lost. This puts them at the top of the improvised "winning record ranking of 2020". BIG fans can now say they're the best in the world at something, yay.

One final interesting note about these statistics is that none of the team in HLTV's top five appear in the top five of the winning record ranking, except for FURIA. Respeito FURIA.

The Return of the Peanut-brain