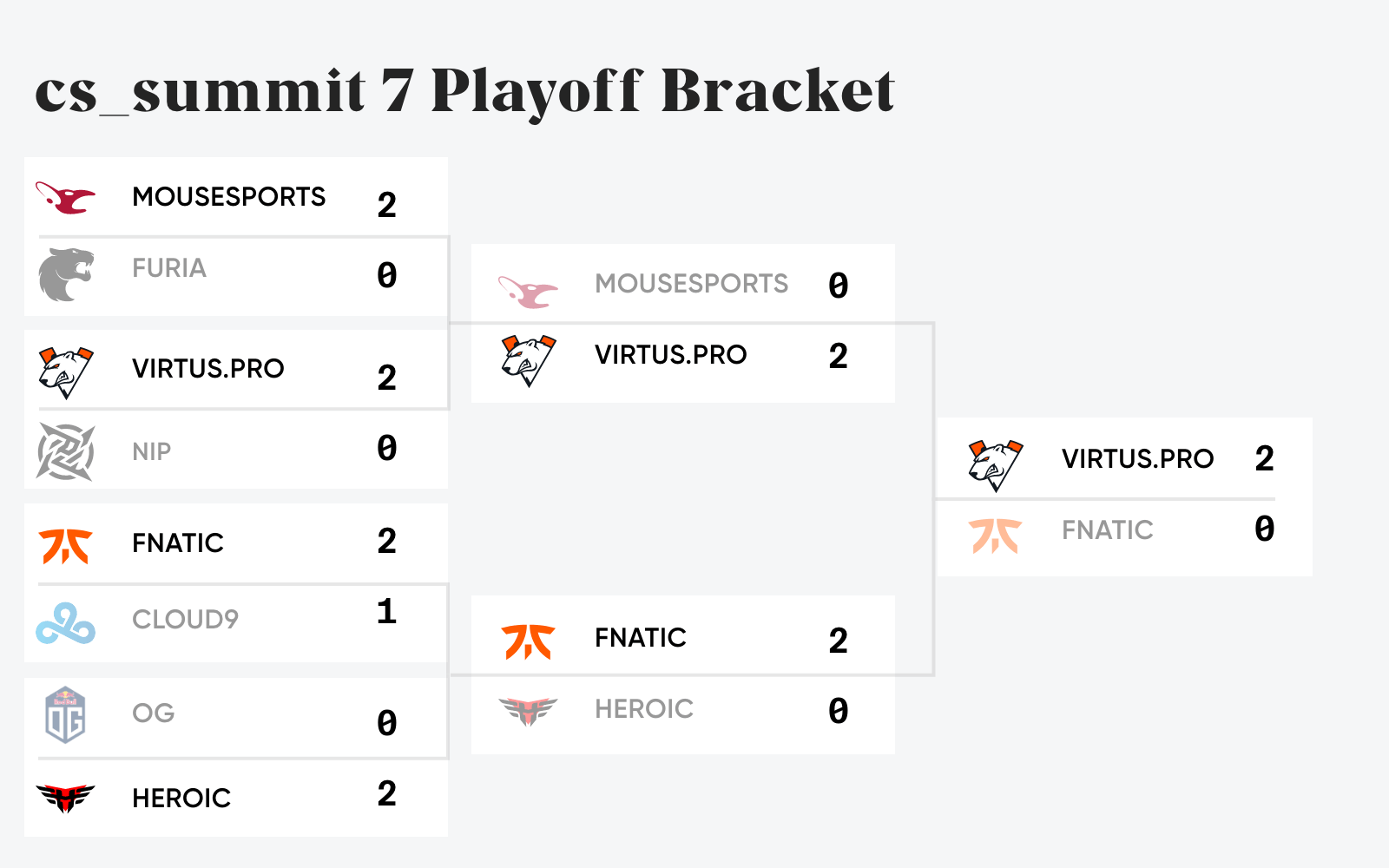 Three things are certain in life. Death, taxes and Danes beating you in Counter-Strike.

At the 7th edition of cs_summit the latter didn't hold up, because Heroic fell flat against Fnatic in the semi-final, but at least karrigan managed to sneak a top 2 on the individual leaderboard. You might want to read that again.

If arT and FURIA are WWWWW on the server, Virtus Pro are WWWWW off the server. They played 5 games and took 5 wins at cs_summit 007, with 0 maps lost. Impressive.

It seems like every time we switch our CIS allegiance, we're being one upped. On Friday we hyped up Gambit, and then both Spirit and Virtus Pro goes on to win tournaments within 48 hours.

At this rate we'll start adding it as a service, maybe we can even make North win the European Development Championship. Nah, nevermind.

Fnatic was the latest victim for JAME and his slow and meticulous comrades, as they were ground to a pulp in the Grand Final. Before that, the CIS team let Mousesports bleed to death in the slowest 16-6, 16-5 win ever.

VP seems to have a preference to drag things out, even when they don't save.

Elsewhere the big story was karrigan leading from the front, and Complexity sneaking out in the back. We don't know what happened to the JUGGERNAUT since losing oBo, but Jason Lake has a pretty good idea it seems.

And if worst comes to worst, he can always rely on his Bitcoins (unlike certain others).

It's yellow for a reason

Who picks up when you call the banana phone? BananaGaming of course. If your radar needs a golden touch, you can grab this limited edition version (pw: gooseman) of Simple Radar that we made with Maxim.

When one of our favourite YouTubers reached out, and asked if he could get a custom made Simple Radar skin, we of course said "hell yes".

Now if you think it sounds a bit stupid, we're here to tell you that it is absolutely NOT the case. The radar turned out to be pretty damn epic, and looks stellar. Over to you for the review, Mr Banana.

FaZe pick up a magician 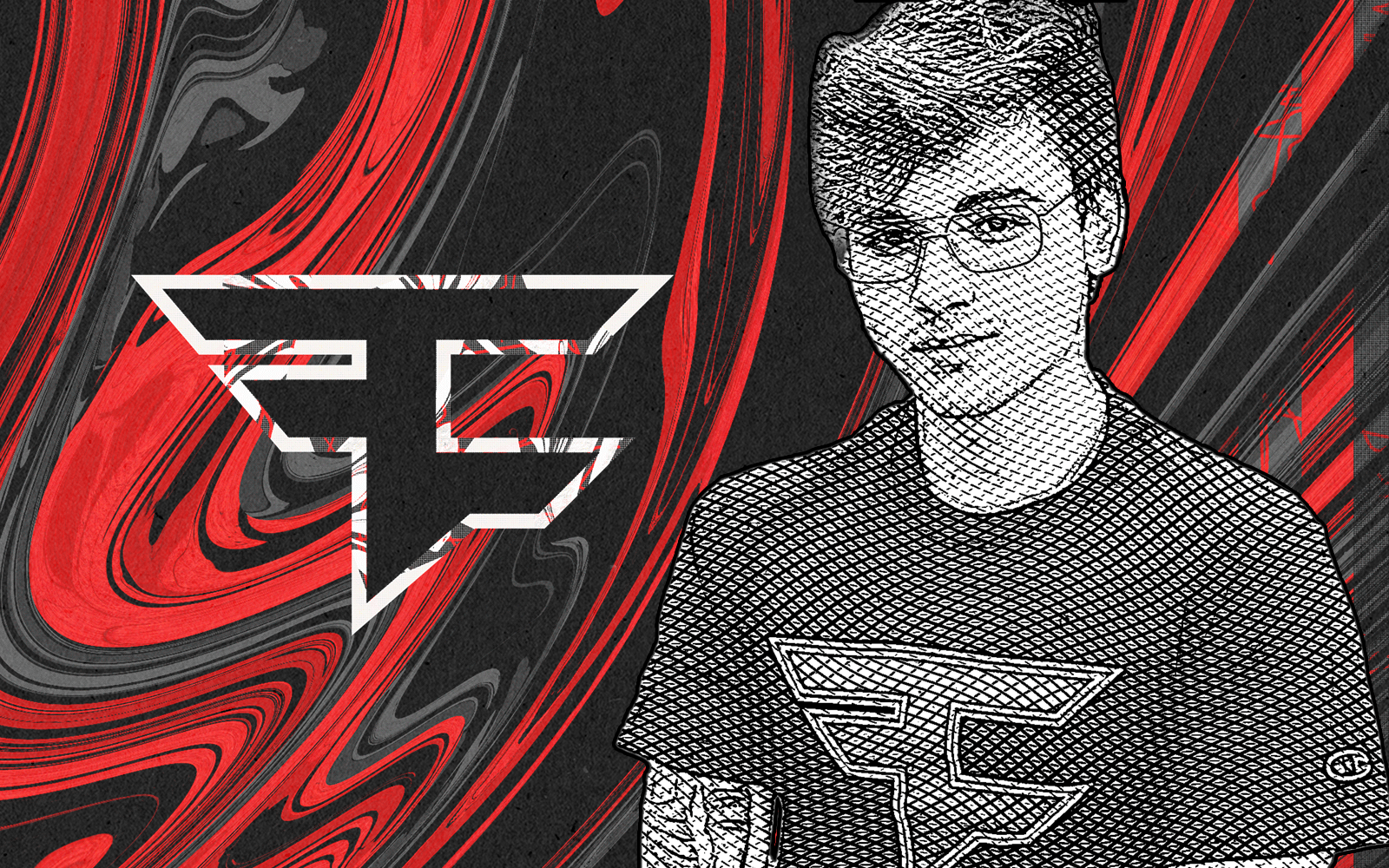 The Canadian version of the aim-bot that is, (well, was) ScreaM, has finally signed with a team after the player break, and it turns out DeKay's rumors were true: Twistzz is going to FaZe Clan.

After being rumored to be going everywhere - from OG (replacing ISSAA) to mousesports (we have zero clue what was going to happen here) to our personal hope of EXTREMUM, he ended up on the theoretical European super team.

Twistzz replaces Kjaerbye on the team, confirming the current roster to be coldzera, olofmeister, broky, rain and Twistzz. As per speculation, karrigan will likely join FaZe when his contract with mousesports is up in March and take olof's spot.

If you want some more on Kjaerbye and his potential locations - keep your eyes peeled for a new TL;DR podcast coming your way this week!

Karrigan with a superstar team under the FaZe Clan org? It'll never work.

Twistzz should now have an experienced IGL in karrigan, and FaZe might be able to have a functional super team instead of a constantly underperforming one. This feels like deja vu.

In a delicious stroke of irony, the first official match with Twistzz that FaZe have on the books, is against Team Liquid in Blast Premier Spring, perfectly bookending a career at Team Liquid.

TL;DR's new recruit Logan is a big Liquid fan, so we gave him the chance to spill his heart out. Just don't imagine the backing track to Eminem's 'Stan' while reading it.

Russ, we miss you already. We wish it could have worked out. We wanted things to get better, we wanted the team of pure aim gods, without a real AWPer, without an experienced IGL, with more firepower then 2018 FaZe, we wanted it to work.

From, Liquid fans around the world.

We, for one, welcome our new CIS overlords

It's the year of the CIS region - you can get on the bandwagon now or be left behind.

Somewhere in the East of Europe there's some conveyor belt labeled 'World Class Snipers' that runs all day long. If s1mple wasn't enough, last year we discovered how absolutely insane sh1ro was. And coming in to the first DH Open of the year, all eyes were on the young diamond.

Don't get us wrong. sh1ro was good. But degster is something else.

After Spirit took down BIG in a game that lasted longer than an unedited episode of By The Numbers, they were tasked with the daunting task of toppling FPX, who had smashed EG earlier on.

They did it with aplomb - destroying FPX 3-0. The best of five was shorter than the best of three the day before, and degster in the first two maps died 16 times. Total. All of the FPX players died 16+ times on both maps.

It wasn't all him - mir was astonishingly good, as ever. mir picked up 70 opening kills at the event, and degster 61 - the next highest at the event was 37. Thirty-seven.

We would have loved to clown on mousesports if chrisJ's new team had battered everyone and taken the trophy - but unfortunately he had a poor grand final. Getting there isn't bad in your first event, at least.

And anyway, we've always been Team Spirit stans in the TL:DR offices (read: Discord). Sooner or later, we all will be.